I could possible use some help with the speed options.

Scenario 1 - I have speed set to 3 (which I interpret as the fastest). Using Control Surface Studio, I have one of my encoders designated to scroll through Ableton scenes. Even at speed 3, it takes 4 clicks of the encoder to generate one scene change.

Scenario 2 - I have an encoder dedicated to a send. I would like the ability to quickly twist an encoder all of the way from 0-100% (0-127) and back very quickly for live performance purposes. I have tried both Acceleration and Speed 3. Neither of these options are enabling a full articulation of the value. I have to use repetitive twists to get to 100%.

Are there any other options to increase the acceleration or lower the encoder resolution?

We’ve received this request before and are working on increasing the number of speed options available.

For now, and you have said it correctly, the maximum fixed speed is Speed 3 and the Acceleration will be even faster when it detects a fast movement.

That means that potentiometer-like speed would increase the value for the parameter in 8-9 with every step of the way.

This can be noticeable in some parameters as little jumps, but we’ll test it and release it as soon as possible as new speed options.

For now, I suggest you the acceleration mode with a not son fast flicker. There is a sweet point in the speed that will make the encoder LED ring indication follow your fingers at the same speed. Maybe it won’t go all the way but it’ll be pretty close.

Let me know how this works for you, and hope I clarified your doubts.

Thanks for the info and breakdown. It makes sense that subconsciously I’m looking for a pot-style turn radius and that the encoders inherently work different.

I think your Accelerate function works great for many applications. For example, if I have the resonance turned up on a filter, obviously I want a smooth frequency sweep without the stair steps.

For applications that use quick/less-precise/large-jump turns, like live send throws, it would be beneficial to have a faster speed option.

I don’t yet understand the nuances of why the session box scene scrolling feature (using CSS) would require 16 detents to move one scene down. Maybe it looks at the scroll as a percentage of scene count. I’m not sure, but I will continue to experiment with it.

Until your release I’ll also experiment with finding the sweet spot in acceleration mode.

As always, thank you!

I did an experiment to see how the Session Box behaved when I created 128 scenes and used the encoder in Speed 1 mode (Scenario 1 in my earlier post).

The tactile click could be very useful for scrolling a specific number of scenes without looking at a computer screen if I could get to a 1:1 ratio of scenes per encoder click.

Any have thoughts on how to achieve this?

(p.s. Though my Scenario 1 has revealed itself not to have a dependency on a faster speed, my Scenario 2 would still benefit from the additional speed mode)

Update: I deleted scene 128 and now I get a 1:1 click to scene change behavior.

The tactile click could be very useful for scrolling a specific number of scenes without looking at a computer screen if I could get to a 1:1 ratio of scenes per encoder click.

Any have thoughts on how to achieve this?

The best way to scroll through a list or actually anything where we don’t know how long it is, is by using relative modes instead of absolute.
With relative modes, you get just a -1, +1 behavior, kind of having two buttons, 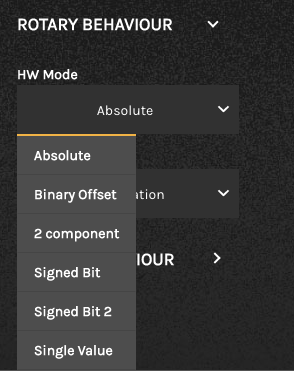 I haven’t used CSS, so I don’t know which one will work, but I would start in order.