So, as a preamble: with a (very basic) working prototype I’m convinced that the V2 controllers are an amazing platform for, among other things, grid-like step sequencers. (I gather that @mike and @scanner_darkly are also working on similar projects, and I hope they’re having as much fun as I am!)

Thinking heavily about this application, and looking at existing hardware interfaces, I wonder if you’d ever consider making a Medium+ controller that was 9x6 instead of 8x6, essentially allowing an x16 grid with two additional buttons per track (for selection, solo/mute setting and display, etc.). A basic design would be: 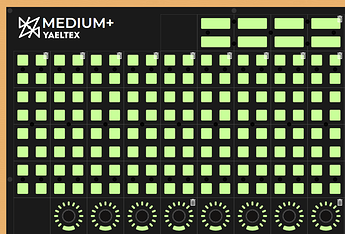 Those one-square spots don’t look great, but I wonder if you might be working on one-square controls (even if feedback-only?)

@mike’s Hachi affords this (on both sides) using a large controller, and the Polyend Seq, WMD Metron, and Synthstrom Deluge all use this pattern (Seq and Metron with 1 row of track-associated buttons, Deluge with 2).

There’s probably less of an argument for a Large+ because a 24-note grid would be pretty odd (at least in Western music, unless you wanted to innovate the electrowaltz genre).

And that (plus the Polyend Seq) brings me to my other request: a long controller, 16x6, to allow an x32 grid. This would be around 60cm (which is what the Seq is, with smaller buttons plus other controls), which sounds crazy, but it’s about what a 37-key MIDI keyboard would run.

17x6 would be nice, for the reason above, but unless there’s a way to bump the digital limit up, that wouldn’t matter…

These may be niche enough needs that they shouldn’t be standardized, in which case I might just be asking if you’d consider doing custom controller sizes (for additional $$$, obviously, since the economies of scale are less).

It would be really nice to move the “brain” around too.

In this case I don’t know that it would help… but e.g. if you put it on the bottom here, it would take up the room where the encoders are, but then you’d have 5 open boxes on the top instead of one and one. (but since 4 % 5 > 1, you’d still end up with an empty spot… so like I say in this particular case maybe wouldn’t help without 1x1 controls)

Thanks for all the input @gc3 and @qbrd!

I see your point @gc3, super valid.
The 16x6 or 17x6 would be lovely. I can imagine the form factor being useful for other applications, like fx channel strips for example.

And adding new frames it’s relatively easy, its in the pipeline for the future.
That being said, right now the “to-do” list is full, so it won’t happen in the short run.

Those one-square spots don’t look great, but I wonder if you might be working on one-square controls (even if feedback-only?)

as you can see in the factory calculator only “feedback elements” are also planned for the future. Smaller elements are something we want too, it opens the design possibilities a lot.

It would be really nice to move the “brain” around too.

The challenge there is industrial design. One should uncouple the connectors from the mainboard (requires a redesign of the Kilomux) or publish the connectors on the front panel (I like this for a future cv in/out module but not for power/usb/din5). But yeah, making the “brain” unobtrusive as possible is the way to go.

I would love to say yes to all the great ideas you guys have, but we have to build the monster step by step. Anyway, we are saving all these ideas for future evaluation.

Oh c’mon, we just mentioned it a couple hours ago, you mean it’s not done yet!

Totally understand that not everything is possible! But I can dream up anything!

Ok, thanks, now my brain is begging to see al that blank space filled with other components

And my brain is begging to see it on my desk

Seriously, that’s amazing! Seeing it (so cool!) gets the wheels turning on other possibilities as well. Thanks so much for the render!

I know how long your to-do list is but it will be a good day if/when these longboards get their turn.

17x6 would be nice, for the reason above, but unless there’s a way to bump the digital limit up, that wouldn’t matter…

Also, there is room to grow here. The logic in the framework is that supports up to 16 digital elements (RB41, RB42, RB82, and ARC41 are the elements available today) but we could make an element with (up to) 32 components/buttons (for example an RB84). So in theory its totally possible to populate all space in a 17X6 case.

Aha! That is very good to know.

I am extremely excited for the future of this product!

I’d love to think about adapting hachi to an 8x32 grid! long and skinny is a cool form factor.

I have some notes about additional elements I’d like to see, but I decided to spare you guys all the feature requests

can we hear about your ideas for feedback-only elements though? I’d definitely like something like a grid of RGB LEDs (like 4x16 in the usual 4-space configuration) and a screen that I can easily send text to

a screen would be awesome!

That 8x32 grid will be nice to see

Displays and LED grids are things we would like to add to the framework in the future. Also, the feedback-only connections are great for combining analog elements with some feedback, like LED strips for faders, indicators for knobs, or joysticks.