tl;dr - Can buttons and other LED feedback items on Yaeltex controllers have their LED Colours controlled by incoming MIDI Data?

Greetings all.
Apologies if my query is outside of normalcy, but such is the world in which I exist. I do not own a Yaeltex controller, nor have I ordered one. I have made several designs and I’m excited about the next step of my rig control insanity.

I was going to present a bunch of detail on my current rig sans any custom controllers, but suffice to say that my rig is currently utilising an Event Processor which controls the LED feedback on my generic ‘box o’buttons and knobs’ controllers.

I find this quite flexible, as my button states sometimes have more than just On/Off values - sometimes they represent states that are affected by other controls. (eg a button may turn on/off a sequencer Track, but another button might Mute a group of Tracks and therefore the feedback to my controller indicates that a Track would be playing, but it is Muted).

So - I couldn’t find this detail in the Kilowhat manual, but I was hoping that Yaeltex controller button colours could be affected by incoming MIDI data (Velocity, or Note#, etc) determining button colour.

Thank you in advance for your assistance.
Apologies about my language issues.

I read it all and I can happily tell you that all buttons and encoder switches (and VERY soon, with firmware V0.16 encoder rings as well) can change color with incoming MIDI notes and CCs.
The velocity or value of the message will select the color from this table.

This feature is named “Value to color” and you can configure the buttons and encoder switches feedback to behave this way.

In the case of Encoder Rings, we will use the same NOTE or CC number on channel 16 to select the color from the same table.

You can see this feature in action with the encoder switch light in this video.

Let us know if you have further questions!

Thank you for the response.
This is excellent news.

I adore your product and have been enjoying many happy hours designing just the right set of controls to pair with my control scripts. I find decision making to be difficult.

Honestly, I have one further question: Any plans on offering arcade buttons with LED feedback, either on the button themselves or the button rings? 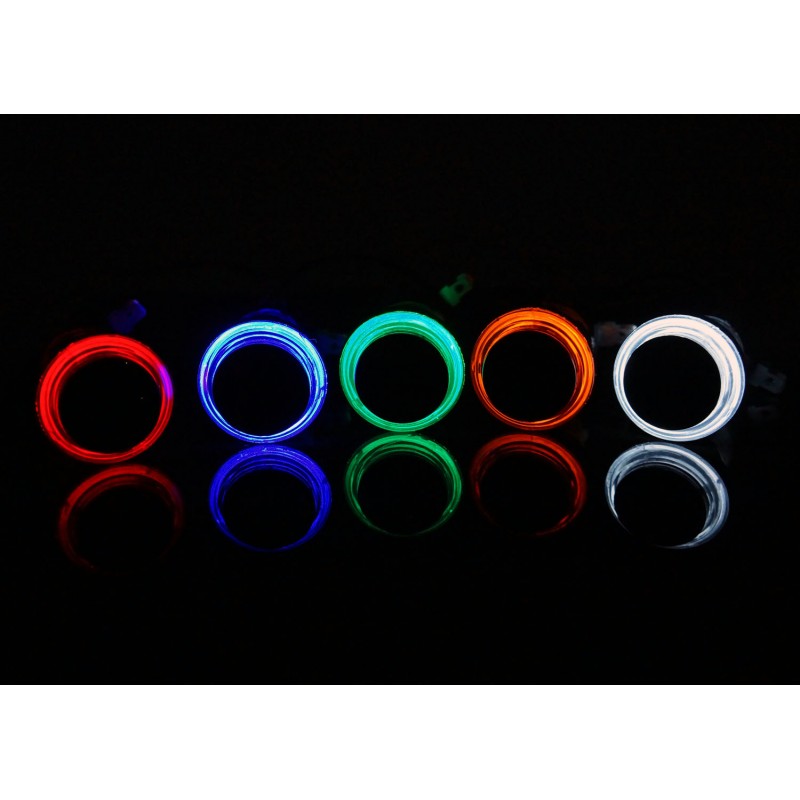 Many thanks for the kind words

Take your time! No hurries for the design

For now we only offer the LED feedback on the corner for the arcade buttons, and no plans for the near future for changes on this module.

We tried but haven’t found anything on the market with the right specs.
The major problem we had when we searched for the component was to get the correct button height, as we needed to be a really low profile to keep the form factor of the cases as low as possible which was a primary vector on the industrial design department…It’s really a game of compromises…

Thank you @francoytx & @Ale
Appreciate the response, and the insight

I may excel at forcing MIDI to do my bidding, but I suck at design and decision making! Let’s see where this takes me.

I know this sounds like a strange request, but please: I’m not very bright nor socially adept in most regards - Would you happen to have any photos of what Black Arcade buttons on a plain black surface might look like? I’m wondering if a darkened stage and black-on-black would be miserable or not.

I may excel at forcing MIDI to do my bidding, but I suck at design and decision making! Let’s see where this takes me.

Hope it takes you to a great place

Would you happen to have any photos of what Black Arcade buttons on a plain black surface might look like?

Hope you can picture what you want with them.

This is excellent. Thank you very much!